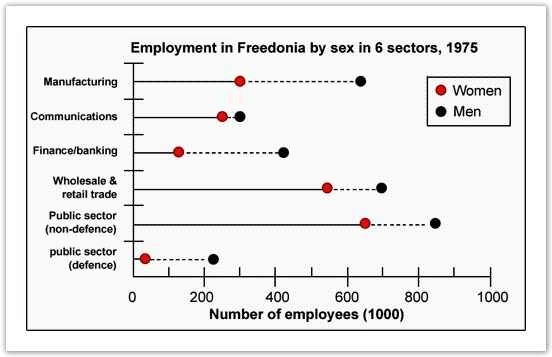 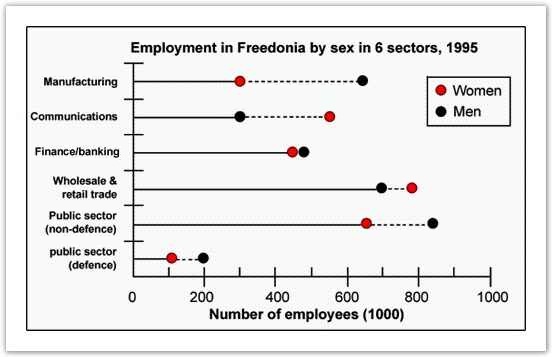 » You should spend about ۲۰ minutes on this task.

The graphs below show the numbers of male and female workers in 1975 and 1995 in several employment sectors of the Republic of Freedonia.

Write a report for a university teacher describing the information shown.

» You should write at least ۱۵۰ words.

۱٫ Two line graphs are provided in this writing task 1, so start the introduction part as follows: The given line graphs provide data on….. Do not use, ‘the give line graph shows…’ as there are more than one graphs present in this question.

۲٫ The two line graphs compare the number of male and female employees in 6 employment sectors in Freedonia. The first graph shows the data for the year 1975 while the second graph shows data for the year 1995. ۳٫ The first graph shows that the male employees were well ahead in all the job sectors in Freedonia. But after 20 years that scenario changed and women did a remarkable progress in the job sectors. ۴٫ Initially, in 1975, men were higher in number in terms of their involvement in different work sectors. Only in Finance and Banking sector, females were close to males. ۵٫ After 20 years in 1995, the number of women employees crossed the number of men employees in communications & wholesale & retail trade sectors. ۶٫ In the communication sector, the number of women employees reached to 550 per thousand while this number was only 210 per thousand in 1975. ۷٫ Do not only give the numbers of male and female employees in 6 job sectors of Freedonia in 1975 and 1995. Rather make a comparison of the male and female employee numbers and show some of the comparisons for women about how many of them were employed in 1975 and how these numbers have increased in 1995. Keep in mind that the writing expects you to be able to compare the women’s improvement and increasing involvement in job sectors of Freedonia.
دیگران خوانده اند
ثبت نام آزمون EPT فروردین ۹۷
Summary of the graphs: In Freedonia, women’s involvement in major job sectors has increased remarkably in 20 years. Initially, in 1975, they were less in number than the male employees in all the 6 major job sectors. But within 20 years, they did significant progress and have crossed the number of male employees in some sectors.

The chart given represents a comparison of employment scenarios between males and females in the republic of Freedonia in two different years, 1975 and 1995. It has also taken into consideration 6 sectors of employment. It is obvious that male employees occupied most of the jobs while women progressed in terms of their career in Freedonia over the time.

As it can be seen from the given line graph, in 1995, the number of male employees was significantly higher in most of the sectors, mainly in manufacturing and finance/banking. In these two sectors, the men had more than the double of positions occupied than the woman. In finance and banking, there were four hundred male employees against just over hundred and fifty women workers. The only job sector where the ratio of men and women were almost similar was the communications. In 1995 the scenario had materially changed, once the number of women employed had sharply increased in most of the sectors except for manufacturing where it stood at three hundred employees. On the other hand, the women that in 1975 did not lead any sector in numbers, after twenty years they started to lead two of the 6 sectors listed on the analyse, including communication and wholesale and retail trade. Overall it is possible to assume by analysing the charters that the employment scenario had changed over the years in Freedonia, with the women occupied more space in the companies.]]>
دیگران خوانده اند
واژگان کلیدی در رایتینگ آیلتس
Academic IELTS Writing Task 1: Male and female workerswww.ieltsgo.irآموزش رایتینگ آیلتسدوره های آنلاین آیلتسرایتینگرایتینگ آیلتسرایتینگ تسک 1رایتینگ تسک 1 آیلتسموضوعات رایتینگ تسک 1